Your diesel fleet needs a reliable AdBlue supplier to keep you on the road and keep your pollution to a minimum. Crown Oil is a national supplier of AUS 32 diesel engine fluid, trusted by businesses across the UK.

AdBlue for Diesel Engines Delivered Across the UK

AdBlue (AUS 32, ISO 22241 NOx reduction agent) is a diesel fuel additive that has been introduced to help eliminate the harmful emissions released by heavy vehicles used daily on our roads.

The use of diesel exhaust fluid (DEF) in modern diesel vehicles has become a requirement in order to help achieve the UK Government’s net-zero carbon-reduction target by 2050. It’s actually a legal requirement if you drive a modern heavy goods vehicle to limit the number of harmful exhaust emissions being emitted and as so, the use of AdBlue to achieve this is becoming more common in modern diesel-fuelled cars.

As an official VDA-licenced AdBlue supplier, Crown Oil can supply it to you at a competitive price in any quantity from 10 litres up to 36,000 litres. To purchase AdBlue from a supplier you can trust, choose Crown Oil.

With Crown Oil, AdBlue is delivered UK-wide in quantities to suit your requirements, including:

10 litres – a small amount for light usage
210 litres – enough AdBlue to keep you on the road for a while
1,000 litres – your AdBlue is delivered in an intermediate bulk container (IBC)
5,000 litres and more – for a load this big, we’ll send a dedicated articulated tanker

Don’t worry if you haven’t got room to store 5,000 litres of AUS 32: we also provide AdBlue storage tanks which are perfect for keeping your diesel engine fluid clean and safe. So if you’re looking for where to buy AdBlue, or if you are looking for a bulk AdBlue supplier, simply use the form on this page to let us know how much you require and we can deliver it to you within 48 hours of purchase.

As is the case with most bulk deliveries, the price of AdBlue will depend on several factors, including the amount you’re ordering and the location we’re delivering to. Regardless, our Adblue quotes are among the most competitive on the market, and we’ll always aim to get you the best price possible for your AdBlue diesel engine fluid.

If you need to purchase AdBlue for your diesel vehicles, speak to one of our friendly team today on 0330 123 1444. 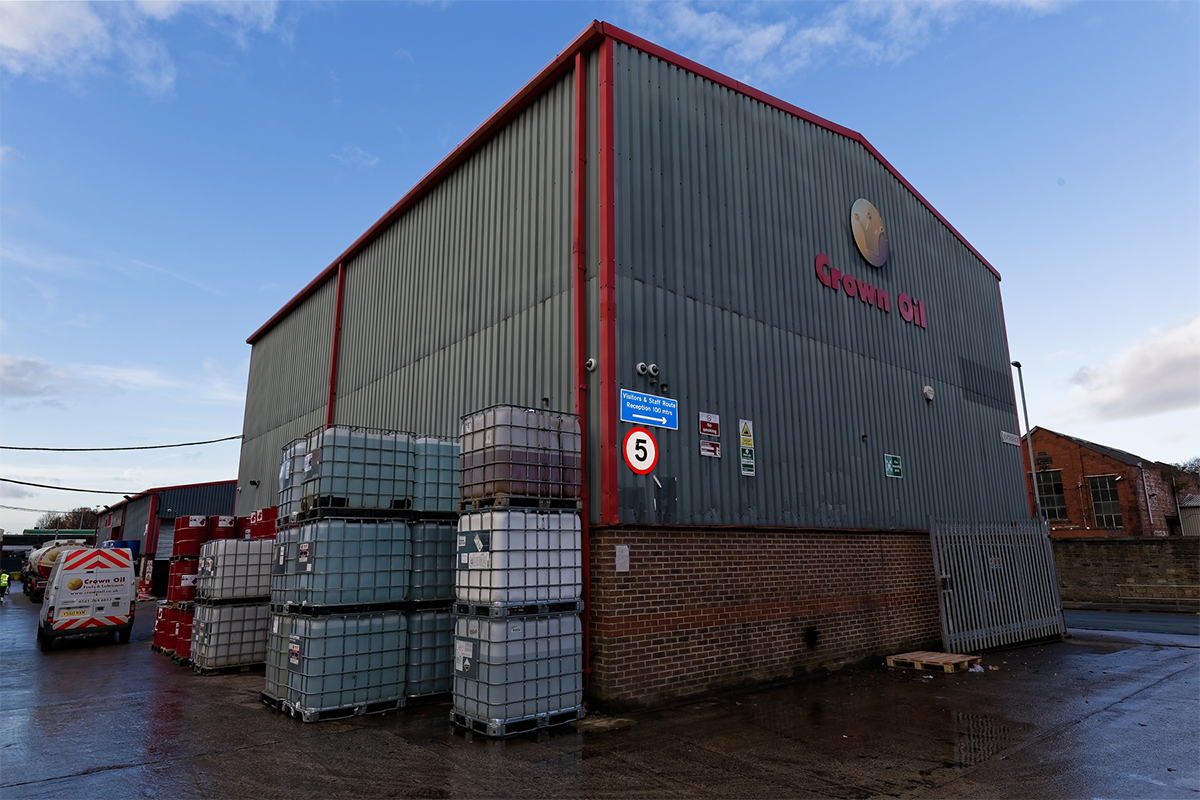 AdBlue is the common name used for AUS 32 diesel exhaust fluid (DEF),  the diesel fuel additive that has been introduced to help eliminate the harmful exhaust emissions released by heavy vehicles used daily on our roads.

Using AdBlue is an effective means to reduce Nox emissions from diesel engines as it simply requires the addition of the fluid to your vehicle’s AdBlue tank.

As of October 2006, the use of the DEF in modern diesel vehicles fitted with SCR technology, including both passenger cars and HGVs above 7.5 tonnes (industrial vehicles, buses and trucks) has become a legal requirement to help achieve the UK Government’s net-zero carbon-reduction target by 2050.

As an official AdBlue supplier, Crown Oil can supply it to you at a competitive price in any quantity from 10 litres up to 36,000 litres. To purchase AdBlue from a supplier you can trust, choose Crown Oil.

What does AdBlue do? Why do modern diesel-engined vehicles require AdBlue?

Reducing Nox emissions is essential as it brings diesel-engined vehicles in line with Euro 6 emissions regulations, which called for a 67% drop in nitrogen oxides (NOx) released in the exhaust emissions of diesel cars.

There are two ways of achieving this reduction: through a Selective Catalytic Reduction (SCR) system and through exhaust gas recirculation. If your vehicle uses the SCR system, then you’ll need AdBlue.

What’s more, when your SCR-equipped vehicle’s AdBlue levels are running low, a warning alert will appear on the dashboard. If it runs out of completely, the car will lose power and reduce its emission in line with legal standards. Its performance will be returned when its AdBlue tank has been replenished.

The main benefit of bringing your fleet in line with Euro 6 standards is that it decreases the overall negative environmental impact of your business operations. It furthermore helps your company to gain more ‘green’ awards and accreditation for meeting emissions regulations.
AdBlue is completely non-flammable, safe to handle and easy to store

How does AdBlue work?

Through a process called Selective Catalytic Reduction (SCR), AdBlue reduces the harmful emissions which are released from diesel engines as the fuel is burned. AUS 32 (Aqueous Urea Solution 32.5%) is the official name for AdBlue although the majority of people who use this additive call it AdBlue. It consists of 32.5% high purity urea and 67.5% deionized water, giving it its scientific name AUS32.

As diesel burns within your vehicle’s engine, it is forced through the exhaust system and expelled out into the air that we breathe. Before the emissions are released, the AdBlue formula is sprayed onto the harmful gases and the SCR Catalyst breaks down the bad stuff (Nitrous Oxides).

Once that’s done, all that’s left is nitrogen, water and CO2 to be expelled from the exhaust system. Check out the diagram below which shows AdBlue’s Nitrous Oxide reduction in action.

The AdBlue trademark is currently held by the German Association of the Automobile Industry (VDA (Verband der Automobilindustrie)). Clicking the link will take you to their page with additional notes about this diesel additive.

Modern heavy goods vehicles fitted with SCR technology are required to use AdBlue by law. As of October 2006, all vehicles above 7.5 tonnes are manufactured with this technology. This includes industrial vehicles, buses and trucks. Your diesel fuel will never come into contact with the solution as it is stored in its own designated tank with a sensor system and gauge. It is sprayed onto the exhaust fumes soon after combustion and works from there.

Is AdBlue a fuel additive?

AdBlue fluid is an additive used after the combustion process and isn’t always considered an additive in the conventional sense. A fuel additive is generally defined as a liquid that is added to the fuel itself, whereas AdBlue is added to the exhaust fumes before they’re released into the atmosphere.

How long does AdBlue last?

The rate of consumption for AdBlue is approximately 1:20 of the rate of diesel fuel usage on standard Euro IV, Euro V and Euro VI trucks, so it’s relatively low AdBlue solution is sprayed into the exhaust stream of modern diesel engines as a post-combustion process.
For passenger cars, 1.5 litres of AdBlue will be used every 620 miles.

What emission reductions are there from using AdBlue?

How do I store AdBlue?

While storing AdBlue is straightforward, it must be kept between -11oC and 30oC to maximise its 12-month lifespan. As well as supplying a wide range of storage tanks for fuels, we can also provide AdBlue storage tanks to safely store the diesel additive, in addition to both hand and electric pump options depending on your requirements.

Since AdBlue is corrosive, these pumps make the dispensing process easier and safer, but you should always ensure you’re using it with care and be sure to wash your hands thoroughly after contact.

What is AdBlue made of?

Is all AdBlue the same?

AdBlue is, in fact, a trademark of VDA (Verband der Automobilindustrie), but so long as the diesel exhaust fluid you buy is certified to meet the AUS 32 criteria, and meets ISO 22241,  then there is no difference between which brand you use.

What happens if you run out of AdBlue?

Typically before running out, a warning light will go off on your dashboard to indicate you are low on diesel engine fluid. However, once this runs out, vehicles will not start if the AdBlue tank is empty, as the emissions that would be released from the engine would be too high.

I’ve put AdBlue in my diesel tank – now what?

AdBlue is not an additive to diesel fuel – it’s a NOx reduction agent that is sprayed into the exhaust fumes, so it’s unwise to start your engine if you’ve poured AdBlue into your diesel tank, as you’ll be letting water into your engine. Call roadside assistance or the appropriate emergency service if this happens to avoid engine breakages.

No. The reason for this misconception is because AUS 32 diesel engine fluid is made from a solution of urea and deionised water, and urea is most-commonly known as the chemical found in urine. Due to the industrial amounts of urea that needs to be produced, the urea used in AdBlue is synthetically made.

To learn more about AdBlue or for a quote regarding Adblue delivery from Crown Oil, please speak to one of our knowledgeable staff by calling 0330 123 1444 today.

What else can we help with? 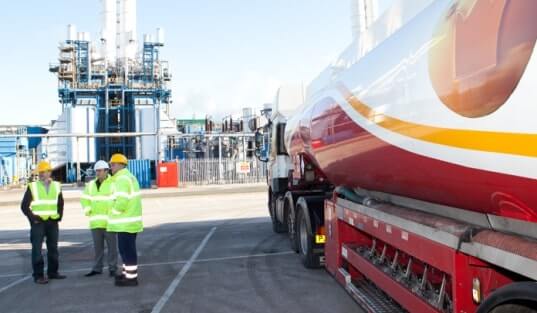 Unrivalled Service from Start to End

Our Commitment to the Environment